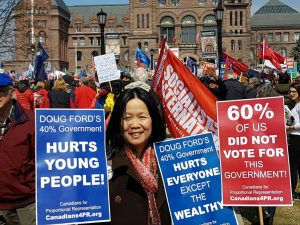 What an amazing turnout at the Education Rally on April 6th at Queen’s Park in Toronto last weekend. The purpose of the rally was to protest against the education cuts to much needed staffing and programs by Doug Ford’s 40% government. Thousands, young and old, turned up at Queen’s Park, and the legislature was surrounded by buses from all over Ontario.  It was packed!

Canadians4PR was there with signs, petitions and flyers to remind protesters why we are faced with these cuts in the first place – because we have a voting system that keeps resulting in unaccountable majority governments that 60% of us voted against.

Our little team collected page after page of signatures as we carried around our signs reminding people that the current Ontario government only had 40% voter support.  Some were so excited by our signs, they spontaneously came up to us to sign our peitition.  Others took our picture, or asked where they could get one of our signs. A driver stopped at a light even asked for one for his lawn!  Everywhere we went, we got nods of understanding and approval.

No matter which party you support, any government that holds a majority, even when 60% of voters voted against them, is harmful and undemocratic. Trudeau’s 39% federal government has broken promise after promise, including the pledge to change our voting system to Proportional Representation. Ford’s 40% Ontario government, is ruthlessly cutting essential services with nothing to keep him in check. Because of our voting system, we keep having to endure policies that don’t reflect what the majority of voters want. The result is the dissatisfaction and frustration with government that we are all so familiar with, which is bad for democracy and voter engagement. 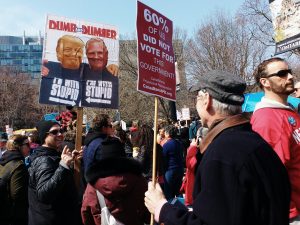 Majority governments are in general an unproductive way to govern. Although it may seem like majority governments ‘get more done’, much of the time they are actually engaging in the phenomenon of ‘policy lurch’, wasting significant taxpayer dollars undoing the work of the previous government.  This creates economic and social instability for businesses and public services alike.

There is also no effective way to hold majority governments to account, even by their own supporters, which results in broken promises or promises that were never sincere to begin with. Without any form of real accountability, majority governments are essentially free to do whatever they please, short of what they might see as damaging to them in the next election. When governments aren’t even elected by a majority of voters this amplifies these problems even more.

Healthy governing should involve input from a diversity of people affected by an issue.  That’s why coalition governments under proportional systems are the norm in democracies all over the world, including almost all of Europe, and almost all of the OECD countries in the world.

Coalition governments offer more stability due to an an expectation of collaboration, unlike the competitive and divisive atmosphere that we are used to experiencing in Canadian politics. When proportional representation takes away the possibility of a majority government, politicians get down to working with each other instead of always looking for an opportunity to gain the upper hand.

A Voting System that Reflects Diversity

Voting systems based on First-Past-the-Post, a winner-take-all system, are in their design not capable of reflecting the diversity of its voters.  Votes that do not go towards the winner make no contribution to the final result and are wasted.  Because of this, the diversity of what voters voted for is lost.  In Canada, at least 50% of all votes are wasted in this way, which means half of Canadians find their wishes ignored at every election.

Voting systems based on the principle of Proportional Representation are voter-centric, not party-centric; they focus on how accurately the results reflect the will of voters.  In countries using proportional systems, 90 to 99% of votes are effective in electing someone depending on which variation of PR is used.  As a result, proportional systems not only result in representation that is more reflective of the diversity of political values, those elected also tend to reflect the cultural and gender diversity of a population more accurately.

It’s Time to Take the Next Step

Canadian democracy has been evolving since Confederation. You might not be able to imagine the early days of voting when there wasn’t even a secret ballot. Or of being denied the vote because you were a woman or an Indigenous person. Each change in the way we vote has added another layer of democracy and diversity to our country.  Now it’s time to take the next step and get rid of the system that is keeping out political diversity, and adopt a proportional system that makes all our voices heard equally.

Diversity has always been one of Canada’s greatest strengths.  Having it reflected in government will make our country even stronger.