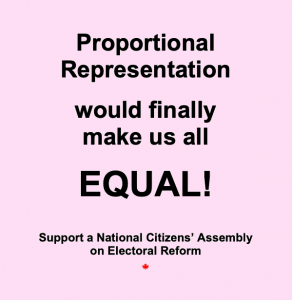 Political equality starts with the way we vote.

Everyone’s vote should result in the representation they voted for. Any other result is undemocratic.

We can’t have equality if over 50% of votes don’t result in any representation and keeps those voters’ voices from being heard.

We can’t have equality if our very electoral system gives us disproportionate results that have no relationship to what we voted for.

We can’t have equality if our electoral system keeps us from electing more indigenous peoples, women, and people of colour to reflect their proportions in our population.

Even if a minor party rises to third place, they still have no real power. Every election is just a jostle between the same two major parties. Real change never happens, and that is by design.

This inability to elect a diversity of voices to represent us has a ripple effect throughout all aspects of society.  Systemic discrimination trickles down from the top.

We need to recognize non-proportional electoral systems, such as our current one, as intentional forms of systemic inequality. These types of voting systems were put in place by the privileged of the time in order to ensure that power would remain with them.

These are the same people who brought us the practices of colonialism, and prevented indigenous peoples, women, the poor and racial minorities from being eligible to vote. Why are we still using a voting system borne of this outdated thinking?

Even though we all have the right to vote now, by continuing to use a voting system that doesn’t give everyone representation, the overall effect is that the voices of the same people are still being silenced.

If you support the dismantling of systemic racism and discrimination, then it would be of great service to your cause to include proportional representation and electoral reform as part of your conversation.

Imagine having all our votes finally result in representation that we voted for. Imagine achieving a government that is actually a mirror of our wonderfully diverse society. There would be so much more we could accomplish!

But right now, our electoral system is a huge block to progress.

If you want our elections to result in a Parliament that accurately reflects the diversity of Canada, make supporting a National Citizens’ Assembly on Electoral Reform one of your issues this election.