What is Wrong With Our Voting System?

The voting system we use in Canada today is a non-proportional voting system, commonly referred to as First-Past-the-Post.  FPTP is a simplistic voting system that awards seats based on only one criterion – that the winner win the most seats in the riding. It is not a system that is designed to result in representation that accurately reflects the views of citizens, nor will it ever be able to produce such a result.

Are the results of Canada’s voting system fair?

Voting is our responsibility as citizens to let our values be known, and elect a Parliament that will run our country according to our views.  However, because our voting system is too simplistic, it will never produce this result.  This is because of the simple fact that votes for losing candidates have no effect on the outcome of the election.  If you didn’t vote for the winning candidate in your riding, it is as if you didn’t vote at all.

The views of around 50% of Canadians are excluded in this fashion at every election.  As a result, Parliament is never a true representation of what people wanted.  Some views always end up being over-represented in Parliament and others end up being severely under-represented.  This can create some very undemocratic scenarios.

Have a look at some of the results of recent elections in Canada:

As a result of the 2015 federal election, 54.5% of the MPs were Liberal.  This is despite the fact that only 39.5% of voters actually voted for Liberal representation.  In other words, Liberal voters received 16% more representation than they actually voted for.  This type of result is called an ‘artificial majority’, where a majority is won only because the voting system created it, not because a majority of citizens actually expressed their support.  This meant that even though 60.5% of Canadians did not vote for Liberal representation, they were left with no say in the federal government’s actions because the LIberals wielded a majority. Unfortunately, even the 39.5% that did vote Liberal had no recourse for the party’s many broken promises because there is currently no way to hold majority governments to account.

The 2018 Ontario election was also an artificial majority.  Despite the fact that only 40.5% of Canadians voted for Conservative representation, they received 61% of the representation in the legislature,  They have 20.5% more representation than they actually voted for.  Again, this results in a party having absolute power where there should not have been, resulting in a government that doesn’t have to be accountabile to anyone.

New Brunswick’s election in September 2018 had a strange result called the ‘wong winner’.  The party that won the most seats was not the one that got the most votes… yes, it can happen.  The Progressive Conservatives won 22 seats with 32% support, yet the Liberals who had 38% support only won second place with 21 seats.  This is because the PC’s got 6 extra seats more than what NB voters voted for.  Even though the Liberals also received extra votes as well, 2 was not enough for them to win.

And then it happened again.  Our federal government now holds a wrong-winner minority government. Even though slightly more Canadians voted for Conservative representation, Liberal voters received 13% more representation than Conservatives.  That is a huge discrepancy resulting from a difference of 1%. 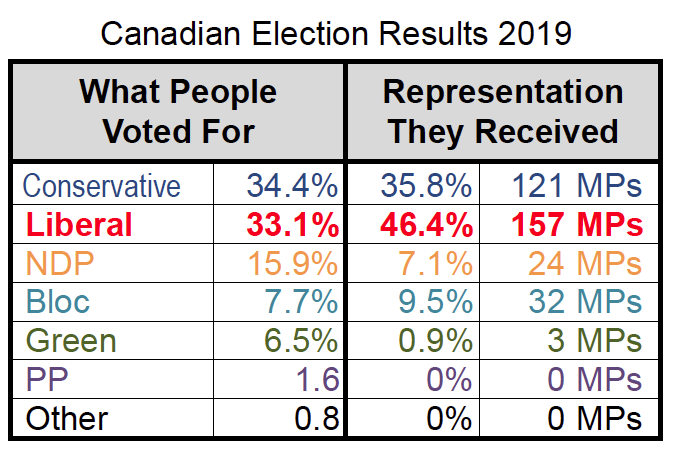 Wrong winner results used to be a very rare occurrence, but now it is happening more often. Why?  Because the diversity of views in our country keep growing and shifting, and our voting system is too simplistic to handle the results of more than two parties.

The riding you live in has a hugely undemocratic influence on whether or not your vote will result in representation.  Our current non-proportional voting system makes it impossible for you to elect someone unless you live in a riding where there is enough support for your views.

This creates the illusion that everyone in certain areas of the country always vote one way, and everyone in other areas always vote another.  This creates a divide that actually doesn’t exist.  There is a diversity of voters in every area of the country.  We just don’t see that if we just look at the election results.  The illusion of these ‘sweeps’ also plays into the growing partisanship and adversarial atmosphere of politics.

What is the solution?

The Political Diversity of Canada

Parliament should reflect the views of all Canadians.  Where we live should not dictate whether or not our vote counts.  We should be able to elect someone to represent our values no matter where we live, and the diversity of political values of every part of Canada should be reflected in the results of every election.

If changing the voting system is important to you, please share this information with others.  Thank you.