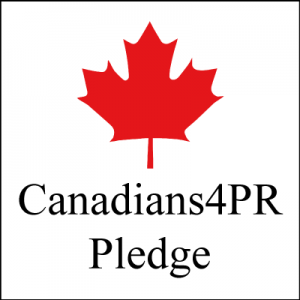 Voters across Canada need to speak out in one voice to change the voting system.  Imagine the impact that would make – one that cannot be ignored!

Our voting system is the one major roadblock to progress that we are all faced with, and it will take us all working together to change it.  It is urgent that we do so as soon as possible!  As long as our voting system remains unchanged, we will always to be vulnerable to unaccountable false majorities led by those with only their own self-interests in mind, instead of the government we actually voted for.

But we need you to help educate other voters, and help them make the link between the voting system and the issues that are important to them.

Canadians4PR is committed to Canadians powerfully standing up for democracy and demanding that the federal parties commit to changing the federal voting system to proportional representation if they are elected.  You are key to accomplishing this!

Individuals can take the Canadians4PR Pledge and commit to some or all of the following 5 actions:

Join the many individuals across Canada who are taking the Canadians4PR Pledge and let’s make Proportional Representation a reality together!

See who has taken the Canadians4PR Pledge!

When you live in a democracy such as Canada, you expect something as important as the voting system to accurately reflect what voters want. When I discovered that it wasn’t so, I felt betrayed. It also seemed illogical to me how 60% of us is always subject to a government that we didn’t vote for.  All our votes should be equal in the ability to elect someone to represent our values. Also, diversity is stronger than monopolies, and parties need to learn to collaborate to govern, so that everyone’s values are represented in resulting policy. That’s what democracy should look like.

Prevent unfettered majority governments from capricious acts fueled by populist rhetoric instead of the popular vote.

We have required electoral reform, in the form of proportional representation, for far too long. Our antiquated, archaic first-past-the-post system has been abused by political parties like the Harper Conservatives, and now the Trudeau Liberals, for far too long. Justin Trudeau himself promised electoral reform, and then once elected he swiftly broke that promise. It is time Canadians demand proportional representation, and hold fair elections.

I am tired of the results of the ‘first past the post’ elections. There are too many ‘back-room-deals’, too many decisions made that benefit friends and relatives of elected officials.
There are important decisions to be made if this world is going to continue to support life, and the people in power don’t believe that everyday people want changes to be made. People’s voices need to be heard.

Proportional representation would give us policy in line with the majority of Canadians on the environment, health, education, wealth distribution, and every aspect of our society. It would save billions wasted in policy lurch. It is long overdue.

PR is important to me because I want fairness in our democracy. I was very upset when I began to understand false majorities – how a candidate could get only 25 to 35% of all the votes cast across Canada and yet end up winning an election and having majority power in government with the First Past the Post voting system. I am also upset by the waste of taxpayer dollars when we have policy lurch after elections. I would like to see more minority governments when parties have to co-operate more in making decisions.

We need government that is accountable to the voters, and who must work together with elected officials of other political parties to deliver on policies that actually benefit all Canadians.

Because I want every vote to count. And I want people in government to work together for the betterment of all the people of Canada

No more false majorities. A better bunch of people running for office. It’s just fairer. More opennessss in government. What the majority of people want, would at least have to be considered, possibly acted on. Politicians would have to debate and compromise instead of just ramming through bad legislation.

I have lost faith in a system that produces majority Governments without majority support. It depends upon uneven distribution of support in order to determine the make-up of parliament. The lack of regionally proportional representation is a problem even when a true majority obtains power. The present system is largely arbitrary; it can even result in majority Governments in the hands of a Party that has not even gained a majority of support. This is ridiculous.
A Proportional Representation system can be devised within the Canadian Constitution which would avoid all these problems. I would advocate that the design of such a system must avoid the major problem with PR, that of fragmentation into numerous small Parties.