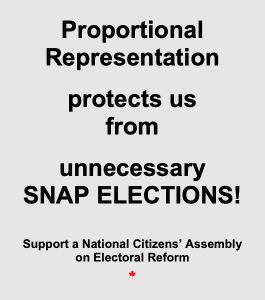 An election after only two years? Do you want to put an end to power-grabbing snap elections?

When a voting system makes it possible to win a majority of seats with less than 40% of the vote (@37% is common in Canada), parties are always scheming to win complete power, at the expense of voters. In fact, the change of just a few percentage points can mean the difference between a struggling minority and a majority that has no accountability to anyone.

This incentive is what causes minority governments under non-proportional systems to often be short-lived.  For instance, the current government was elected with 33% of the vote.  A perceived increase of support to just 37% or more could make it very likely to win a majority of seats.  So an election is called because there’s no resisting the possibility of an easy win.

With a proportional voting system, this incentive would be a thing of the past.

Under proportional representation, the current party would have to increase their support from 33% to over 50% of voters to win a true majority.  That would be extremely difficult.

Most people don’t realize that every federal party in Canada in reality only has a minority of support.  Even the most popular party usually only earns fewer than 40% of our votes.  As a result, there is no incentive for minority governments to call an early election because achieving an increase of over 10% in order to gain power is extremely unlikely.

Under proportional representation, minority governments are very stable and are the norm. Parties accept their minority status and work in an atmosphere of collaboration on behalf of their voters, as they should.

Polls show that the vast majority of Canadians really do want parties to work together and to stop wasting time vying for power.

If you support collaborative minority governments and want to put an end to snap elections, help the cause of proportional representation. Make a National Citizens’ Assembly on Electoral Reform an issue for you this election.