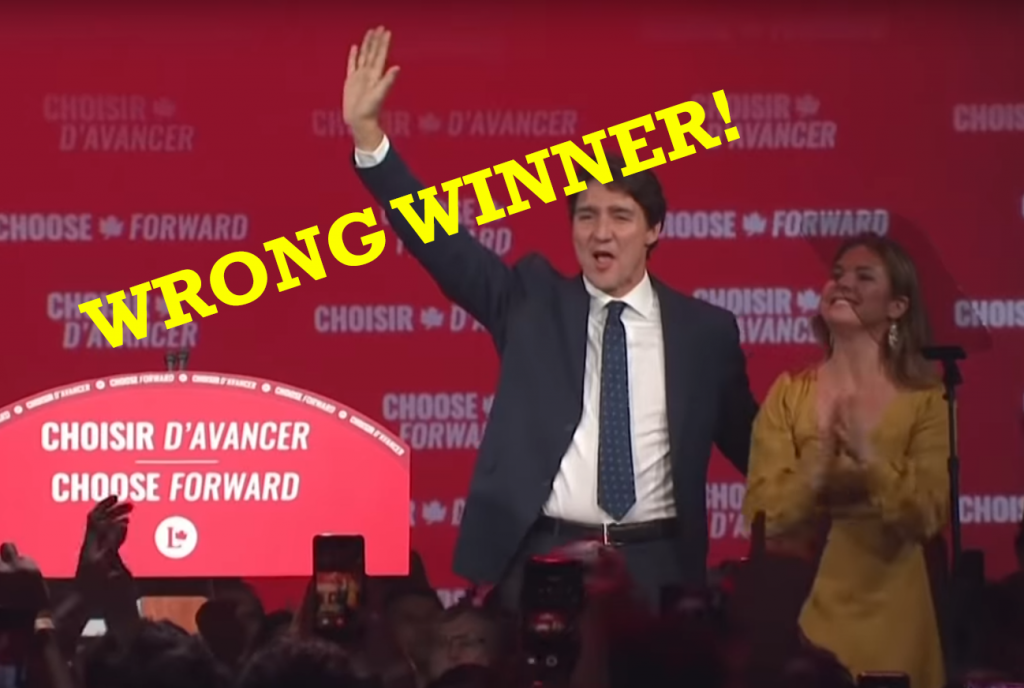 This is the headline that should have been in the news after Monday’s election. Why?  Because it is what really happened.  But most of the media on Tuesday never even mentioned it when reporting the results: Canada’s non-proportional voting system gave the Liberals a wrong-winner inflated minority.

What is a Wrong Winner?

What Are Inflated Results?

As well, the 33% of voters that voted Liberal elected 46% of the MPs, producing an inflated result of 13%.  Inflated results are also a problem systematically created by our voting system.  But how many times have you had inflated results reported to you in the media?  Probably never, but it happens at every single election.

The voting system also gave Bloc voters an artificially inflated result which put them in a wrong-winner scenario with the NDP.  Voters voted for NDP representation at 15.9% yet they were under-represented with 24 MPs instead of 54.  The Bloc only received 7.7% support, yet they received 8 more seats than they should have to accurately reflect the support of voters.  This gave Bloc voters 8 more MPs than NDP voters, even though NDP support was twice as much as the Bloc.

Why is what Canadians really voted for treated as a triviality?

It is time we questioned why, election after election, all the media seems to focus on is the number of seats a party wins.  It is as if what Canadians really voted for was somehow unimportant.  In other words, the fact that we voted one way but got something else seems to be insignificant to them.  But in an election, isn’t the most important result the one that shows us what voters actually wanted?  When the citizens of a democratic country don’t get what they voted for, isn’t that an injustice that should be reported?  Unfortunately, time after time, this most important indicator of Canadian’s political values is treated as if it were just a triviality not worth more than a brief mention.

Wrong winners should make headline news.  Why?  Because they are a gross misrepresentation of what people wanted, and a gross injustice to society.

Inflated results should be reported openly and questioned.  Why?  Because Parliament is supposed to represent us, and should be an accurate representation of our views.  There is no justifiable reason why in a democracy, some people’s views should be over-represented and others severely under-represented.

And parties should be admonished for their inflated seat-count.  Why?  Because instead of choosing to right this wrong, they self-servingly continue to keep a voting system that systematically rewards them with extra seats.

Stop reporting the results as if they represent the views of voters.

The way the media choose to report on election results make it seem as if how people voted and the seat count were one and the same.  This is wrong and highly misleading and creates a huge problem.  Because they downplay the actual facts, most voters don’t even realize that the results are not a representation of what they actually voted for.  They are swept away by the media’s headlines about who won or didn’t win, or who has a majority or a minority. Having not been taught otherwise, most voters naturally assume that the voting system delivers a Parliament that is an accurate reflection of their views.  These one-sided headlines perpetuate that misunderstanding, and give the public a distorted understanding of our electoral system and the actual political make-up of Canada.

Isn’t it the responsibility of the media to keep the public informed of issues that should be of importance to them?  If it is, it has severely neglected its role to educate the public about something that is integral to our democracy – the actual results of our elections.  Not doing so is irresponsibly keeping the truth from Canadians.  It prevents Canadians from making informed political choices.  And it perpetuates an artificial partisan divide that doesn’t actually exist, encouraging growing adversarial politics and voter apathy.

The results of the current voting system have no basis in reality.

The fact is, the make up of Parliament under our current voting system has no basis in reality.  It is not a reflection of what Canadians wanted.  It does not represent the diversity of voters in any riding or province.  It does not represent our country in any way, shape or form.  It just happens to be the crude results of a very simplistic way to count votes.

The most important results are those that tell us the truth about our democracy.

*If we had PR, what would our government have looked like?  See this article to learn how minority governments work.